Can AI mitigate the climate crisis? Not really.

Several institutions have claimed that AI will contribute to solving the climate crisis, but the evidence is scant. On the contrary, AI has a track record of helping emit more greenhouse gases.

Inspired by these bold statements, I set out to find examples of how AI contributed to solving the climate crisis. Germany, where AlgorithmWatch is located, was the perfect testing ground.

Germany is a land of contrasts. On the one hand, it is home to the most popular Green  party  in  Europe.  On the other, its political class supports Europe’s largest carmakers, even though some of them pleaded guilty to conspiring to cheat emissions tests and actively harmed the health of millions of Germans. The country has more wind farms than any other in Europe, but it is the continent’s largest emitter of CO2 (its per capita emissions are largely above the European average, too).

If AI can tip the balance one way or another, it should show in Germany first.

I started by reading through the 500-page report of the German Advisory Council on Global Change. It stressed that any strategy to mitigate the climate crisis needed a rethink of the moral values on which the market system is based, but it was much less clear on the specifics. New technology, the authors wrote, could be a “low-carbon enabler” as well as a “power drainer”. Indeed, data centers alone consumed about 1% of the global electricity output and produced 0.3% of all CO2 emissions in 2014, a share that could be higher today. Automated home appliances could reduce energy consumption, but the production of devices in itself leaves a large CO2 footprint.

In the hope of finding more concrete examples of how AI could contribute to climate preservation, I met with two academics close to the authors of the report. After our one-hour conversation in their shiny offices in the center of Berlin, my hopes were in tatters. One of the very few examples they came up with was – half-jokingly – the smart washing machine. An AI-powered washing machine could be automatically programmed to run at night, they said. This would spread electricity consumption more evenly over the day, allowing for more efficient production systems.

I’m no scientist, but my experience of washing machines has taught me that they already have a timer and that the reason we don’t run them at night is that it’s very noisy and will anger neighbors.

If academia couldn’t help, maybe civil society would. Germany is home to the largest Friday For Future group, a worldwide movement of pupils and students who demand the implementation of the Paris Agreement on climate. I asked Annika Rittmann, one of their spokespersons, if she knew of an instance where AI led to a net decrease in greenhouse gases emissions.

“We base our work on scientific results,” she wrote back. “In this area, they are still very muddy, so that we can’t say much on the topic.”

I wasn’t getting closer to an answer, but it seemed clear that the European Commission and the Data Ethics Committee might have been overenthusiastic in their statements.

Another civil society organization, GermanWatch (no relation to AlgorithmWatch), published a report in 2019 on the chances and risks of AI for the Energiewende. This is a German concept that literally means “energy turnabout” and concretely means that German consumers pay one third more than the EU average for their electricity in exchange for promises of making energy generation sustainable.

I finally found concrete examples. BirdVision, for instance, is the subsidiary of Bürgerwindpark Hohenlohe, a company operating nine wind farms in southern Germany. It operates computer vision software to detect birds and automatically reduces the turbine speed if they come too close. Eight turbines are equipped with the system, and the company says that, although the product is still in development, potential users have expressed interest in seeing the system as soon as it is brought to market. This, GermanWatch wrote, could lead to more acceptance of wind energy and encourage the construction of more wind turbines.

Energy efficiency is the area where AI is most promising, according to the report. Smart appliances could be programmed to run only when electricity from renewable sources was abundant, for instance. On the distribution side, “smart grids” could better balance production and consumption, reducing demand at peak times.

By now, I knew that report writers could get carried away. I asked a dozen companies active in renewable energy how they used AI.

Next Kraftwerke, which distributes electricity, uses machine learning to forecast the production levels of solar farms and the consumption volumes of its clients. The information is used by the commercial department and by personnel in charge of grid stability. A software developer at the company said that other projects were less successful (they tried to model the energy market, for instance). AI is “not an end in itself,” he said, but “a tool in a wider toolbox.”

Others, such as Naturstrom AG, a production and distribution company with over 250,000 customers, or VSB, a turnkey supplier that has installed over 650 wind turbines and close to 60 solar farms, told me they didn’t use AI at all.

Mitigating the climate crisis requires reducing the number of greenhouse gases in the atmosphere, either by capturing them, a very expensive and immature technology, or by preventing their release.

While it seems clear that AI can boost energy efficiency, whether or not energy efficiency does anything to mitigate the climate crisis remains an open question. Take light bulbs, for instance. LED technology allows light to be produced without heat so that a 15-watt LED bulb is equivalent to a 120-watt tungsten bulb, an eightfold efficiency gain. However, it’s unclear whether this translates to lower energy consumption, as cheap LEDs open the way for brighter, interactive advertising screens, among other innovations. They require more than 2,000 watts each, adding up to about six times the electricity consumption of a household each year.

The basic tenet of a market economy is that lower consumption for some translates into lower energy costs and higher consumption for others. This is why the German Advisory Council on Global Change warned that a change in rules was needed before discussing any technical solutions.

In the last two years, over 2,000 hectares of German forest went up in flames. A low number compared to southern Europe (43,000 hectares burnt in Portugal alone in 2018), but very high for Germany. Only Sweden and Latvia have seen larger increases compared to the 2008-2017 average.

Considering the fact that each hectare of burnt land releases between 15 and 35 tons of CO2, German wildfires were responsible for over 40,000 tons of CO2 emissions in 2019. Less than one-hundredth of one-hundredth of a percent of all the greenhouse gases emitted in the country that year, but still a consequent amount. And one where the rebound effect does not apply: Preventing a single wildfire is an actual contribution to climate mitigation, not a potential one.

AI can contribute to the fight against wildfires in several ways, from predicting where they’ll flare up to detecting fire activity using satellite imagery. The technology is so promising that Fast Company, a US magazine, ran an article two years ago entitled “Future wildfires will be fought with algorithms.”

Again, I was hopeful that I could find an example of AI having a net positive effect on climate. I emailed the emergency services and forest management authorities of the German regions most affected by wildfires (Brandenburg, Saxony, and Saxony-Anhalt). I was eager to know how they used or planned to use AI. Alas! They don’t. Not that they’re technology-shy. They do use sensors and software to detect fires, such as automated smoke detectors, satellite imagery, drones, and infrared cameras, just nothing that involves Artificial Intelligence. (The Brandenburg region does not rule out using AI, but a 2015 doctoral thesis showed that the system it operates, FireWatch, outperformed all machine learning models).

I was about to look into another area where AI might be used to mitigate the climate crisis when Greenpeace ruined my quest. On 19 May, they published Oil in the Cloud, a report on how AI helped energy companies extract more oil and gas, a net contribution to the climate catastrophe.

Even though the report focused on the United States, it revealed that Amazon, Microsoft, and, to a lesser extent, Google, encouraged the fossil fuel industry to use their services. AI could, and did, help them find more hydrocarbons, faster.

In one case, Microsoft noted that its technologies could support production growth by “as much as 50,000 oil-equivalent barrels per day.” Once burned in a combustion engine or power plant, that’s over 20,000 tons of CO2 released into the atmosphere, half the amount released by German wildfires in 2019, every day, for just one project.

Getting to the source

Any efficiency gain that AI offers to operators of renewable energy also applies to those who burn hydrocarbons. Because fossil fuel companies are much bigger and more powerful, it seems fair to say that AI contributes to more CO2 emissions, not less. As long as AI is not demonstrably used in projects that lead to net decreases in CO2 concentrations, such as carbon capture and storage, stating that it contributes to mitigating the climate crisis is, at best, wishful thinking.

Finally, I sought out the source the European Commission relied on to come to the conclusion that “AI would change our lives by contributing to climate change mitigation and adaptation.” After all, they might have access to documents and experts that I might have missed.

A source with knowledge of the matter sent me three links. The first one was a listicle titled “8 ways AI can help save the planet,” written by a PwC consultant, containing zero references and published by the World Economic Forum,  a business group famous for its yearly gathering in Davos. The second one was a blog post based entirely on a report by the same World Economic Forum. The third was a peer- reviewed article in Nature, which stated that AI had the potential to mitigate the climate crisis, but very clearly mentioned that it also had the potential to make it worse.

The lead researchers of the German Data Ethics Commission did not answer my request to see their sources.

I’ll leave the last word to Karsten Smid, who’s in charge of climate-related issues at Greenpeace Germany. In an email to AlgorithmWatch, he wrote: “We would be happy if climate mitigation used less Artificial Intelligence, and more human reason.”

Nicolas Kayser-Bril is a data journalist, and he works for AlgorithmWatch as a reporter. He pioneered new forms of journalism in France and Europe and is one of the leading experts on data journalism. He regularly speaks at international conferences, teaches journalism in French journalism schools, and gives training sessions in newsrooms. A self-taught journalist and developer (and a graduate in Economics), he started by developing small interactive, data-driven applications for Le Monde in Paris in 2009. He then built the data journalism team at OWNI in 2010 before co-founding and managed Journalism++ from 2011 to 2017. Nicolas is also one of the main contributors to the Data Journalism Handbook, the reference book for the popularization of data journalism worldwide.
Möchten Sie den Report auf Deutsch lesen? Laden Sie ihn hier als PDF herunter! 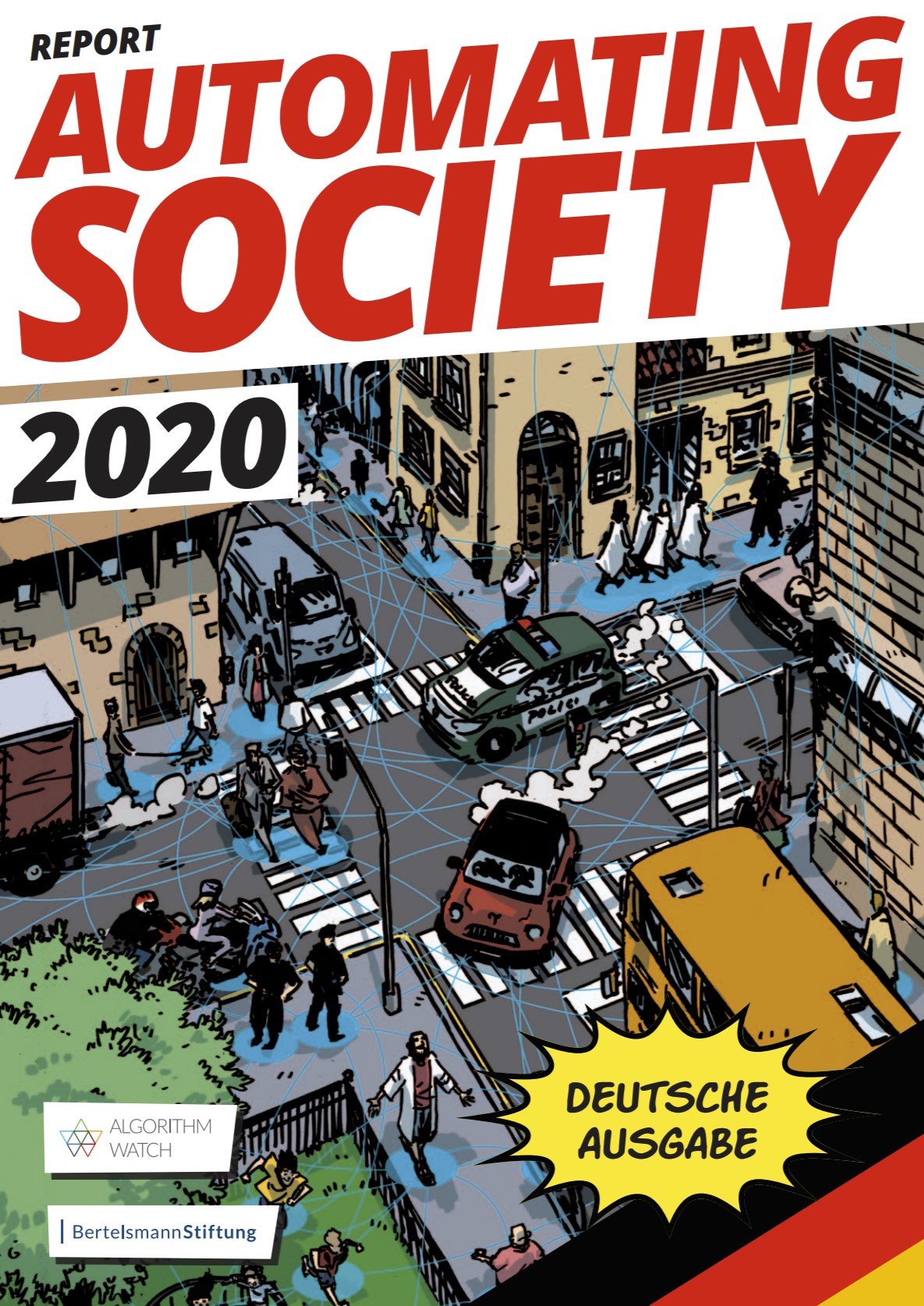